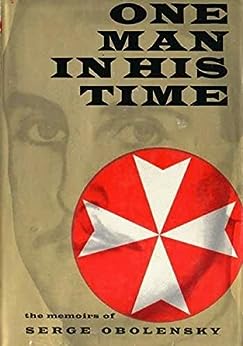 Personal account of a young Russian nobleman and his life through the Russian Revolution, leaving Russia, and serving in two World Wars, including the U.S. Army (OSS) during WWII.
Obolensky was a Russian prince who became a publicist and international socialite. Scion of a wealthy White Russian family and husband of Czar Alexander II’s daughter, the Oxford-educated Obolensky fled his native country after battling Bolsheviks as a guerrilla fighter. The tall, mustachioed aristocrat subsequently divorced Princess Catherine, married the daughter of American Financier John Jacob Astor, settled in the U.S. and worked with his brother-in-law, the real estate entrepreneur Vincent Astor. During World War II, Obolensky at 53 became the U.S. Army’s oldest paratrooper and earned the rank of colonel. He started his own public relations firm in New York in 1949, handling accounts like Piper-Heidsieck champagne. “Serge,” a friend once remarked, “could be successful selling umbrellas in the middle of the Sahara.” A legend in the hotel business, Colonel Obolensky became a Director of Zeckendorf Hotels, then Vice Chaiman of Hilton Hotels.